Positive Thoughts + Synergy + Action = Success For All | Perseka.com| The Place for Personal development and Self-Improvement |Personal Education Restoring Self Empowerment through Knowledge and Action
Home » Accountability » Living an Eternal life 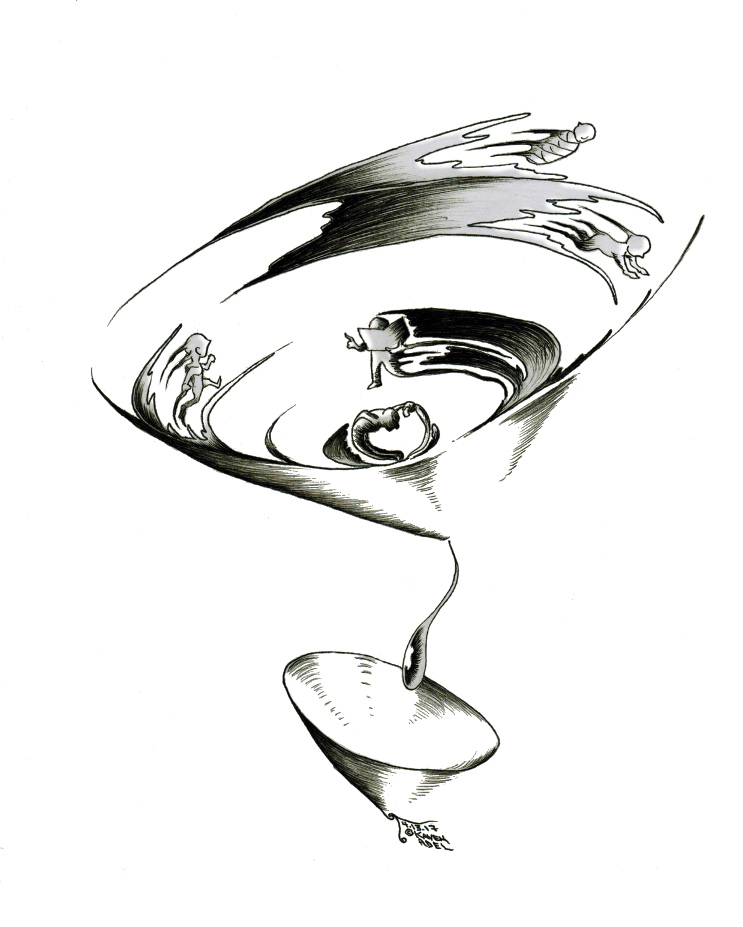 It was just another Thursday morning. Yet it felt a little different. My arm vibrated at 6:00 a.m. instead of 6:25. Correction, the health monitor on my wrist that was set to go off at 6:00 vibrated.

I jumped out of bed and walked over to wake up my older son so he could take a shower. Many years before I was awakened by cries of the same new-born boy–he needed a diaper change and milk.

Time is like a pin ball rolling at the edge of a funnel.

He was already up. Reassured I walked back to take a shower and shave. Same routine. It is automatic. Not like my younger years, during the war, where taking a shower was a once-a-week luxury because of heating oil shortage. As I took my towel to dry off he is standing in front of me already dressed up, smiling. I am surprised as I see myself, a much more confident version of myself, smiling back at me. He asks, “Are you ready?”

The ball moves at a steady speed.

“Hey, that’s my line” I think to myself. After all, I am the father!

Usually we have breakfast but today it is a father and son breakfast event with a twist at his school split into 3 sessions. First, we go to the school library and listen to a passage from a book that connects lessons from sports to life. We work together to answer some trivia about sports. It is not about getting all the answers. It is about working together. Then it is breakfast and mingle time with other fathers and students. We listen to each other and learn to converse. There is enough time for small talk. Enough to connect and get a feel for one another. Finally, we end up in the gym and shoot basketballs. We miss the hoop far more than the swishes we had hoped for. But we keep at it, laugh it off and help each other with rebounds. A hug, a tap on the back and off we go. He splits to his class and me to work.

As I drive to work and listen to a podcast I notice that the 18 minutes that it takes me to get there feels like 10 minutes.  The speaker’s voice is  faster than the usual pace yet the clock reads a longer time. He is talking about ephemeral effects of jobs versus doing work. He defines it as one’s “Life’s work.” The car parks itself.

A brief pause in perception of momentum. The ball enters a rapid decent.

I enter my office with a smile. My “work” begins and ends with smiles. After greeting my team and asking about their families–intently and fully listening to them– I engage my schedule on the pin-up board. We discuss every detail of the work. The technical, emotional, financial and even the unexpected hiccups we may experience along the way. Ultimately, it is about who we are about to connect with today.

The ball is pacing quicker and it can almost see itself as it spins through the narrower neck of the funnel.

I sit down with a patient of mine whom I have not seen for over a year. She is over 90 years old. She has returned to fix a problem that I had addressed temporarily per her request last year. I had explained to her that she would be lucky if it lasts 3 weeks, let alone 3 months. It lasted exactly a year.

“Well, Doctor, it lasted a lot longer than you had thought!” She says with a smile that carried almost a century of life experience.

“You know, I always say this, but I am still practicing of my craft….. and I admit, without hesitation, that I am human…. and not perfect!” I responded. “I aim for excellence with a healthy dose of reality!” As I gently touch her shoulder to reassure her that I will do my best to help her.

“Doctor, I did not expect to live this long but can you do the same thing you did again?” She calmly bargained.

“Well, I am not known for performing miracles but I may have one last trick up my sleeves…. but if this does not work then we’ve got to do the other treatment that I had proposed last year.” I say with 90% confidence.

We get to work and “temporarily” fix things up so she can deal with a much more complex issue of losing her place of residence due the sale of the home she is renting. She has to get rid of over 90 years of physical memories to condense her life to a much smaller living quarters.

The ball is in the narrowest part of the funnel. It almost wobbles before it’s eminent release from the other end.

“Does time go by faster for you? Because I feel that my days and weeks are coming and going at lightning speed now” I ask her.

“At my age, I forget about time but I don’t forget experiences.” She responds without a second of hesitation.

I gently shake her hand and thank her for her patience and understanding but more so for her candid wisdom. It is pouring rain outside. She pays my team and thanks each and everyone for trying our best  to help her.  She smiles as she steps out with her slow gait into the sheets of water pouring from the sky.

The ball is released. It turns into a drop beaming, reflecting and refracting the light that is has within and beyond itself.

I finish writing my charts for the day. Thank my team and get into my car. I stop by a coffee shop. Order my tea, thank my barista and observe those who have ordered before me tapping their feet, the fingers, their devices, their lips, their eyelids, the teeth. Moment of  realization:  time is relative to the moment.

It is tied to the experience.

The tea that I ordered will be enjoyed in the moment that I choose to savor it. A minute earlier or later will not change its significance to me.

I sit down and draw a sketch reflecting on my life’s work contemplating what happens to all of these moments, these experiences. I perceive time is passing faster than when I was a child fearing for my life’s end during the air raids. Back then, everything moved in slow motion as I did not want it to end earlier than it should have.

Was it fear? possibly.

Maybe I wanted control. But now that I perceive that I possess control, time moves faster. Perhaps it is the realization that a biological end is nearer. Yet, I experienced that  near-end for several years almost every night.

No, it can not be that simple. Maybe it is like those basketball shot attempts with my son….. missed more than we made but it was worth the laughs and experiences because we touched and were touched by others.  Maybe the drops of rain remind us that each one is a life time of memories that are more real than a tangible photo album.

Maybe we are all drops that fall from one funnel into another to begin our spinning journey all over again yet just a bit differently than the last one admitting that we are just practicing. Sometimes even coming face to face with a different version of ourselves.

Then it became clear. No fear. No regret. Just hope and trust in a continuation realizing that we are not perfect. We are simply striving to be better humans,  grateful to be alive– timelessly spinning from this funnel into another– into an eternal life.

Dedicated to my son, my family and my 90+ year old patient.

As always to your health and success in all your dreams and thoughts,